Wall Street resumed a steep slide on Wednesday while bond markets rushed to price in the sheer scale of government support programs and handouts announced over the past 24 hours, all aimed at softening the economic shock of coronavirus.

Dire trading conditions continued to make two-way trading difficult and exaggerated the moves as investors piled into cash with the selloff in government bonds in particular drawing European Central Bank support for the Italian debt market.

Even the usual safe-haven assets, such as gold, got caught in the rout as battered investors looked to unwind their damaged positions while oil prices tanked to a 18-year low below $30.

“Another remarkable day in what is clearly fin-de-regime,” Rabobank’s global strategist Michael Every wrote in a note.

“Things have already irrevocably changed and whipsaw market action reflects that this is the case. The only issue is how much further they change from here, and hence where markets settle.”

In Asia, the MSCI’s broadest index of Asia-Pacific shares outside Japan dropped 4% to lows last seen in summer 2016, led by a 6.4% fall in Australia. Japan’s Nikkei dipped 1.7%.

Italy’s debt found itself at the center of the sell-off with borrowing costs soaring, on track for their biggest daily jump since the 2011 euro zone debt crisis. The rout quickly spread to Spanish, Portuguese and Greek yields. Safe-haven German 10-year debt yields jumped to two month highs at -0.2%. [GVD/EUR]

“The liquidity situation is horrendous. What we see if liquidity is completely drying up when one-way selling starts and no one wants to take the other side,” Salman Ahmed, investment strategist at Lombard Odier.

“In the pre-crisis era, banks would step in and buffer the shock. Now there are no banks, only mutual funds which are having a run on their funds — it’s all impatient money.”

Big price swings have saddled market participants with losses, making them reluctant to get back into the market and thereby reducing trading volume.

“We are in the midst of the mayhem really, and I think there is still a risk that the increasing number of infections will keep markets on their toes,” said Hans Peterson global head of asset allocation at SEB investment management.

“It is hard to know how deep the recession will be, and as long as we have that situation it is hard to lift sentiment.” 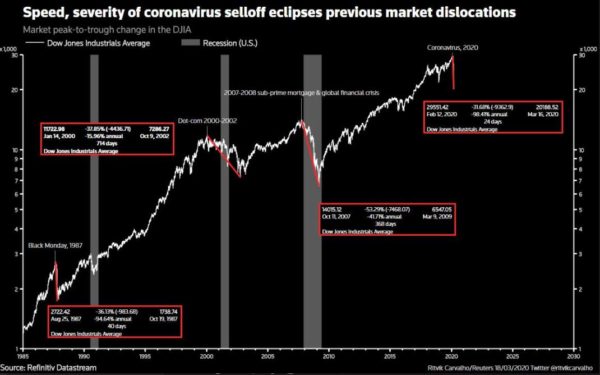